There is a new blog with comments enabled at: http://mrnibbsnewmaps.blogspot.com/ 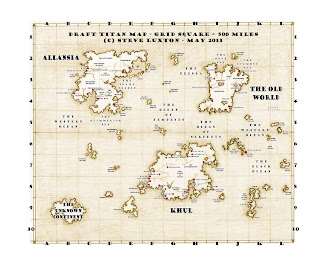 Thank you for watching.

The Map of Titan

The maps of Titan first appeared in 1986 and are now 25 years old. Since then the world of Fighting Fantasy has been explored and mapped in greater detail and expectations have changed. These maps are due a revision.

Meanwhile, members of the Titan Rebuilding forum have spent most of those twenty five years scrutinising these maps to shreds and have made a big list of my "cartographic cock ups". The maps of Titan are often vague or contradictory, sometimes appear to be in error, and are obviously incomplete. Now we're trying to get them fixed and develop the maps further.

This blog is a collection of my sketches, drawings and notes and is for reference only, so you can't leave a comment here. For lots more info about this project go here:
http://fantasygamebook.blogspot.com/2011/04/geography-of-titan-part-3.html 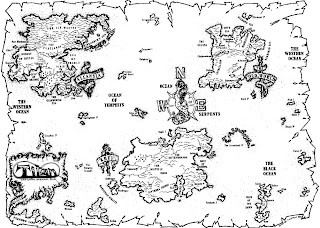 On the map of Titan, the Unknown Land hangs off the bottom of the map. This tells us that we are not seeing the whole of the planetary surface, and we can't be sure how much is missing . In order to map Titan's globe we will need to be able to project drawings onto a sphere, which we haven't got. A related problem is that descriptions of regional climates imply the equator is wrongly placed. My instinct says it should be placed over the Isles of Refuge. 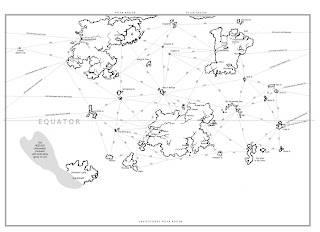 As an initial experiment I've increased the map area and roughly measured some distances between various ports and islands to get some references for later on, and to help work out what needs to be changed. The equator has been moved south which is deliberately wrong, but useful for testing other ideas. Whatever the finished map looks like, we will need to be able to take measurements and determine distances from it confidently.

Map-making involves plotting the surface of a sphere onto a plane and all map projections contain distortion somewhere. In map design, the trick is to determine the purpose of the map and choose the best projection for the job. The new map of Titan map needs to make it easy for players and adventure writers to measure the distance between any two points on the map, and to plot new locations. Any measurements we already have from the game are vague and almost entirely concerned with relatively short distances on land.  Currently, we're using something like this, called a Plate Carree. 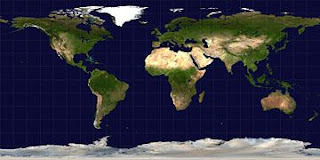 Here are some other projections that were tried out. 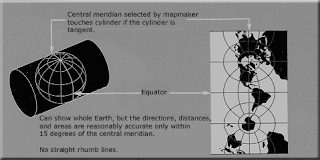 And some others that weren't. 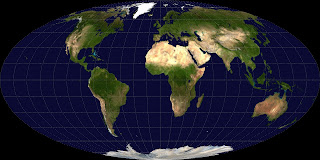 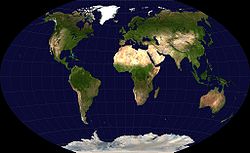 The style of the maps needs to reflect the game setting. Armour and weapons in Fighting Fantasy imply a late medieval period, so the map needs to fit with that. Historically, world maps are incomplete until  after 1600AD and the known world often filled the map area, leaving no space for undiscovered lands. 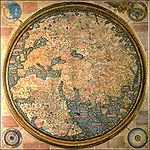 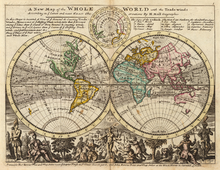 
One problem for fantasy map designers is that people today are used to looking at complete maps which require 20th century technology to make, and players might assume that fantasy maps should be equally accurate and detailed. The first accurately plotted world map was made in the 1860's.

The next stage is to determine the circumference at the equator.  We currently have no useful references for long distances and working them out from the existing maps of Titan is guesswork. My best approximation at this stage is that Allansia is about 1500 miles measured north to south, based on a given distance of 60 miles between Port Blacksand and Oyster Bay. 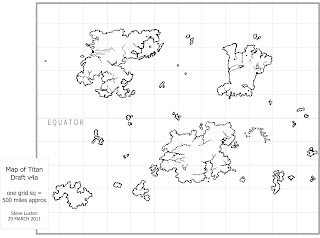 This sketch shows the Isles of Refuge on the equator. Taking descriptions of regional climate into account, repositioning the continents, and leaving more room for polar regions gives a visual improvement. This also makes room for a border, compass rose, and scale bars. At an approximate scale of 1 grid square = 500 miles this sketch map gives Titan a circumference of 6000 miles. This sketch looks at ocean surface currents and smoothes out the climate zones. This should help get the sizes and proportions of the continents and the oceans right, which is the next stage.
*************﻿ 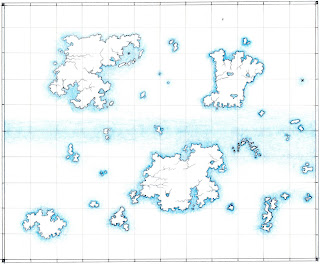 This is the sketch for what is going to be the last world map for a while. Khul has been moved south - possibly too far and will need repositioning. Again. It will get some more colour, and there will be a few other maps which show different types of information. Work on the continental maps starts soon.

It's been an enjoyable two weeks putting all this together. The Titan Rebuilding forum members have done a fabulous job providing all the info, and this project wouldn't have happened if it wasn't for them. Thanks everyone. Special mentions go to Alex Ballingall for for getting me started in the first place, Andy Wright for looking after the Titan Rebuilding blogs, Warren McGuire for superb detailed critical analysis, and Simon Osborne for his Atlas of Titan. Any cartographic cock ups are no longer my fault. The base map has been worked up now and just needs a final check. Khul has not yet been relocated. The next map is Allansia. 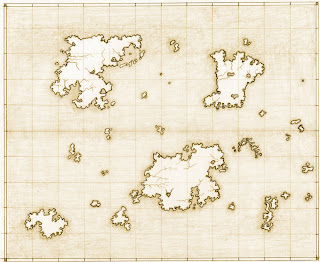 
The crops below show the three base maps for the continents and their surrounding seas. These are first drafts and can be used for plotting the main elements and trying out a few ideas in more detail. They have a different look to the original maps which I like. The grid is 1sq = 500 miles here, but will show more detailed measurements later on. There is also a revised climate map. 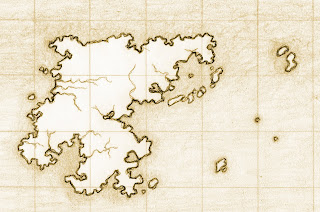 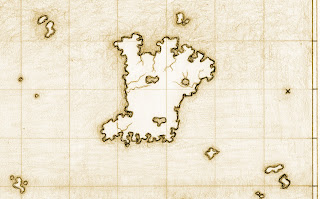 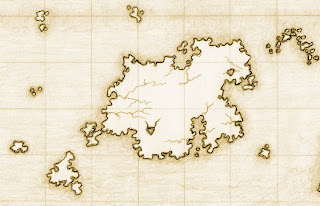 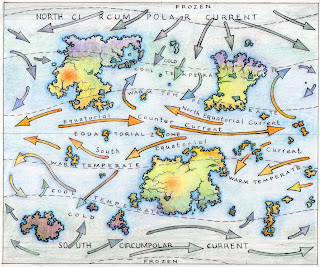 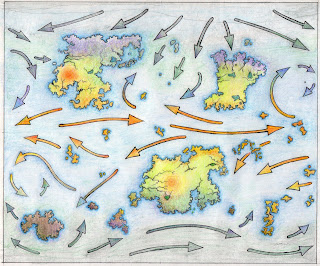 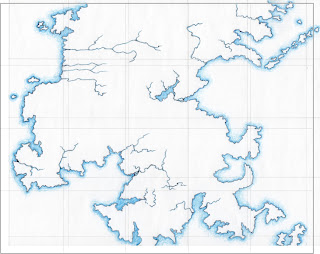 The Allansia base map in progress. The grid squares measure 500 miles. 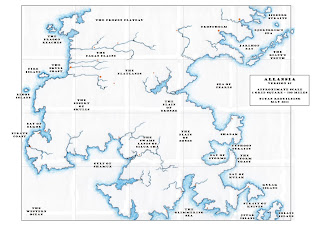 The Allansia map is going to get its own blog page soon and you will be able to leave comments there. Mostly it will be about compiling the info to go on the maps and other information.

Original images  (c) Steve Luxton
Other images are in the public domain and sourced from Wiki and Radical Cartography
Home
Subscribe to: Posts (Atom)

Mr Nibbs
Mr Nibbs is AFF cartographer Steve Luxton. He produced the original maps of Titan and Port Blacksand for Fighting Fantasy and is now collaborating with the Titan Rebuilding forum in their project to bring the maps up to date. In May 2013, Mr Nibbs produced a new AFF2 map of Port Blacksand for Arion Games. Since then he has been too busy to update his blog properly.